Home > Legal Matters > Permission to Work in the USA

Permission to Work in the USA 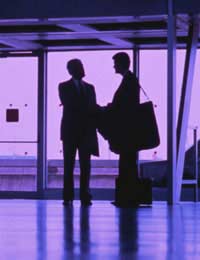 The United States has always been one of the most popular destinations for British emigrants, indeed for emigrants of all sorts. Unfortunately, the days when America threw open her arms to receive the “huddled masses yearning to breathe free” are over, and if you plan to go and work there, you can expect to have to deal with a fair bit of bureaucracy.

Emigrating to the USA

Unless you are something like a Nobel prize-winner, both options require you to have a specific job offer from an employer which must, in turn, have received prior approval from the US Department of Labour.

The most readily available form of Visa is the H-1B. H-1B visas are designed for workers in specialty occupations, that is professions that require advanced training, either through a university degree course, more specific vocational training or many years of on-the-job experience.

An H-1B visa or green card must be sponsored by a prospective employer who has to pay substantial application fees. The employer must approach the US Department of Labour and have it confirm that the offer of employment conforms to the rules. These rules state that the package of remuneration offered is equivalent to that offered to native workers doing the same job in the same area; that no American worker is available to take the post; and that reasonable adverts have already been made to advertise the vacancy.

H-1B visas last for three years but can be renewed for another three. After that, they cannot normally be renewed again. If you want to go on working in the United States, you must leave the country for a full year before you can begin the H-1B application process anew. The United States government takes a decision each year on how many H-1B visas should be issued. The applications lodged will be processed in turn until the maximum limit is reached. Processing will then stop until the following year.

If the holder of an H-1B visa has a partner or young children, they are eligible to receive H-4 visas, which allow them to attend educational courses in the United States but not to work.

You may have heard about the Green Card Lottery system operated by the United States. Its formal name is the Diversity Immigrant Visa Program and its goal is to increase immigration to the United States from countries which do not normally send many immigrants there. For this reason it is not normally open to British people because Britain traditionally has a high rate of immigration into the United States. Country eligibility can change from year to year though, so if you want to emigrate to the US, it’s worth checking the requirements on a yearly basis.

Typically, around 50,000 people are selected at random from among all of those who applied. Being selected does not automatically mean that you receive a green card. There is still an application process and educational and work experience requirements which must be met. However, these are less onerous that those which govern the award of H-1B visas, for example.

So if you’re determined to one day work with a backdrop of the New York sights or the Californian sunshine, you just need to be prepared to fight through the bureaucracy. Then you too can savour the taste of the American dream.

Understanding Embassy Services
Share Your Story, Join the Discussion or Seek Advice..
[Add a Comment]
advice needed:i had worked in the USA for 10 yrs but returned to UK before the green card was issued . over 2 yrs on i nowhave opportunity to return and work in USA for a Canadian based in USA ,... would i need to re-apply for H1B visa and start again or can i just re-apply and have the green card that was issued after i had returned . by all account my Attorney at the time says that a withdraw notice had to be sentbut never had been confirmed if auctioned
drew - 12-Aug-15 @ 8:25 PM
hi!i am Bangladeshi by birth having unlimited permission of stay card in italy and want to move in America.thanks
saddam - 18-Mar-13 @ 3:04 PM
Iv recently been contacted by a film director for a low budget short film.Im in the UK and the film is being shot in the usa. Miami to be precise.The work I do is animatronics and one day on set is all that's required.They are paying for my flights and my days work.I will be requiring one or two nights stay also paid by them.Will I require any kind of work permit?
animatronic guy - 24-Aug-12 @ 5:20 AM
Hello. I am a canadian citizen, wish to buy a gas station in the US. How l may get permossiom for purchasr and run the busines?
nur - 6-Jul-12 @ 3:53 PM
I want to live and work in AmericaSons age 18
issam visa - 28-May-12 @ 8:42 PM
How work in u.s.a and how take green card?
Emochka - 18-May-12 @ 3:10 AM
I would like to go and work in the US for a little while. Is there a visa option similar to the 1 year work visa that you can get to go to Australia and work or does it have to be the H-1B visa? Also, if a person travels out of the US on the VWP and then seeks employment, is that breaking the law? Many thanks
Hopeful - 10-Sep-11 @ 4:26 PM
Hello, Just trying to get some info on possible working in usa. I used to live there sometime ago and my mum lives there with my Step dad and my sister has a green card there. I gave my green card up a while back to move back to where I was born here in the UK. I now have 2 children and my girlfriend wants to maybe move back to USA for a year and for both of us to work. What would we need and does it take long to reply and get documents sorted. Also, what kind of fees are involved?ThanksTim
Tim - 23-May-11 @ 2:08 PM
Had and have friends there would like to try.
dancer - 31-Mar-11 @ 4:02 PM
I want to live and work in USA
Baleh - 28-Mar-11 @ 1:26 PM
Title:
(never shown)
Firstname:
(never shown)
Surname:
(never shown)
Email:
(never shown)
Nickname:
(shown)
Comment:
Validate: