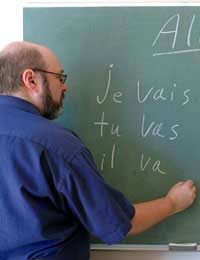 Despite the best efforts of the government to encourage it, we Britons lag sadly behind our continental cousins in foreign language proficiency. Yet if your goal is to live and work abroad and to build a new life there, mastering the native language is probably the most important thing you can do.

Resources for Learning a Foreign Language in Britain

If you're planning to go work in a country where English isn't spoken, you'll want to learn everything that you can of the language while still in Britain. Fortunately, in the age of broadband, learning a language outside a country where it's spoken natively is much easier than it ever was before.

You can now view television stations and listen to radio programs online. You can read newspapers and magazines and look up unfamiliar words on websites without having to fumble through the pages of a dictionary. There are also many great resources specifically dedicated to helping you learn a language online.

Foreign equivalents or close equivalents of the BBC, like Deutsche Welle in Germany, or TV5 in France, often have web pages with lots of multimedia resources which can help you learn.

There are even a few websites which aim to connect language learners from across the world. So if you want to learn Spanish, for example, you can hook up over the internet with a Spanish speaker who wants to learn English, and help each other out. Once contact has been established, you will be able to interact with one another either in chat-style rooms, by instant messenger or even by speaking directly to one another using internet telephony services. If you prefer professional tutoring, it is usually also available via Skype or similar services for a fee.

Once you arrive in your new country, you'll find yourself constantly surrounded by the language you've been trying to learn. Your knowledge of it will begin to increase by simple osmosis. Don't make the mistake of thinking that fluency will just creep up on you, though, and that you no longer have to make a conscious effort to learn.

British people have an extraordinary capacity to live for long periods in countries where another language is spoken without picking up more than a few basic words. In part, this is because the element of necessity just isn't there as much for us as it is for the speakers of other languages.

Often, the shopkeeper or the person on the telephone at the electricity company will be able to speak English or will at least know enough to let you do whatever it is you need to get done. When you absolutely cannot get by without knowing the language, it's a strong incentive to improve.

You'll often find that going to the cinema can be a relatively painless way to learn. In many foreign countries, English language films are shown in their original audio, with subtitles in the native language. That way you can get all the pleasure of watching the film while also improving your language skills.

Using the language at work is also a great way to improve, if your workmates let you. One thing to beware of is that in many professional corporate environments, almost everyone can speak English. While comforting at first, this can also be a hindrance to your progress in learning the language.

After you feel you've acquired enough competence to be basically functional in the new language, therefore, you should ask your colleagues to use it when speaking to you, at least for non-critical communications. Otherwise, they'll just go on speaking to you in English and you won't improve as fast.

The best way to learn a language is through one-to-one communication with another person. In fact, they say the easiest way to learn a language is to find a lover who speaks it and get them to teach it to you, correcting all your little mistakes. If that's not practical, because you're already spoken for, or for some other reason, a tutor is the next best thing. You should be able to hire a tutor relatively cheaply in most places. The local English language press is a good place to look.

Unless you're specially gifted, learning a language isn't going to be easy. Just have faith that if you persist in your efforts to learn, that incomprehensible babble of sound will one day be perfectly intelligible.