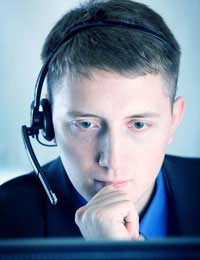 Wherever you go to work abroad, you’re going to want to stay in touch with your friends and family back home. But it’s not just in Britain that international call rates tend to be extortionate. So what are your options?

Thanks to widely available broadband connections, you no longer have to rely on your local telephone provider to make international calls. Instead, you can use the bandwidth of your broadband connection to carry your voice through the ether using Voice Over IP (VOIP) services. So what’s involved in using your PC as a telephony device? First, you’ll need a microphone to speak into and some speakers to be able to listen to the other person. Or you can get the two combined in a headset. PC phones, which look just like traditional phones, but plug into your PC instead of a wall socket, are also available.

After you’ve got the hardware, you’ll need the software. Skype is the world’s leading internet telephony service but it’s by no means the only one. Leading alternatives include Gizmo and Google Talk. Broadly speaking, all of these services offer the same range of features, though there are minor differences between them which might make you favour one over another. Since they’re all free to try out, you should do that and decide which you prefer.

What exactly to these VOIP services allow you to do? You will be able to make direct PC to PC connections using voice or, in some cases, video if the person you want to speak to is online. Each service comes with an Instant Messenger like interface so you can easily see who among your friends and contacts is online and who isn’t. Don’t worry, though. Even if they’re not online, you can still call them on their landline or mobile numbers over the internet. There will be a cost to this but it will be much less than you’d pay by using a traditional phone. There will also be a slightly degraded audio quality compared to a normal phone but it’s usually perfectly acceptable.

If you want to make it easy for your friends and relatives at home to call you, you can even purchase a proxy number in your home country connected to your VOIP service. When your friends call it they will pay local rates, and their call can be automatically re-routed either to your PC or to your mobile or landline phone.

If relying on a broadband connection isn’t convenient for you, don’t despair. There are other ways to make cheap calls. One is to use phone cards. Many companies now market these cards which offer cheap international call rates. You can order the cards over the internet or buy them in shops. If you’re looking for somewhere local that sells them, newsagents and kiosks around big railway stations or airports are usually the best place to look.

Each card comes with its own PIN number and a call allowance expressed as a monetary value. As you make calls with it, the card’s value will be used up and eventually you’ll need to replace it. To make a call, you first telephone a special number, often a freephone or low-rate number, then enter your PIN, followed by the number you wish to call. After that, you’ll be connected just as normal. Calling cards can make international phone calls very cheap indeed, for the loss only of a little convenience.

As you can see, there’s no reason to let high international call charges drive a wedge between you and friends or family back home. Cheap international calls are readily available – so get dialling, and stay in touch!

Renting Out Your Home in the UK

Asking Your Boss for a Transfer or Sabbatical

Should You Go Work Abroad on Your Own?