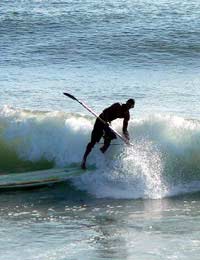 It’s all too easy to think that unless you take a gap year before university, or perhaps even before you start work, then the opportunity is lost forever. But that needn’t be the case. Not only are there far more organisations to help ‘older’ people take gap years, but employers are more likely to help you take a sabbatical, or even take voluntary redundancy, than ever before as you will bring new skills when you return and, often, save them the cost of your wages in the economic crisis.

The Shock of Redundancy

When Tina Stokes, a project manager for a large automotive company, was made redundant due to the global economic downturn, she took a couple of weeks to get over the shock before she could even start thinking about what she wanted to do next.

Tina told us, “My redundancy came very quickly. Although we knew the automotive industry had been badly affected by the worldwide recession, our company had large projects taking us well into the next decade, with confirmed orders and a strong pipeline seemingly making our future secure. But one of the major clients reneged on their order and the company collapsed very quickly. I was made redundant and given a decent payoff, but I knew that I ought to find another job within the next six months to pay the mortgage.”

As it turned out, Tina found it very difficult to find new work. Two weeks after she was made redundant, she sent her CV out to various recruitment agencies and they all said the same thing – ‘it’s very quiet at the moment, come back in six months’. This repeated story didn’t help to build her confidence and Tina was starting to feel rather depressed about her future.

Tina continued, “It was a chance remark from a friend that made me think differently about my future. We were watching someone surfing on TV and she said ‘I’d love to learn to surf,’ and I thought, ‘So would I! …What’s stopping me?!’ I just had a light bulb moment that I was wasting an opportunity by moping around. It was clear that the job market wasn’t going to pick up any time soon, so rather than keep feeling bad by looking on empty job boards and getting rejection letters, I decided to do something completely different.”

Tina quickly rented out her flat, which covered the mortgage and gave her a little bit extra and signed up to a company that specialises in arranging gap years for people over 21. There were loads of options available – grape picking in France, assisting at an international school in Italy or helping to build irrigation systems in India – but what Tina really wanted to do was work at a surf school. Locations and places were limited, but luckily she was accepted to help at a surf school in the Mediterranean, with a small salary supplemented by free board and lodging.

Longer Than a Gap Year?

Tina told us, “Just making the decision to do something instead of staying at home gave me a massive boost, but getting on the plane and arriving at the resort was incredible. I knew I’d made the right decision because I was able to use some of my project management skills too, which quickly increased my salary. I’ve met so many amazing people and I’m sure it will help me keep a positive outlook when I get back to the UK and start looking for work when my placement is up. But I can’t help thinking I can’t see myself back in an office in London so I may end up staying here!”