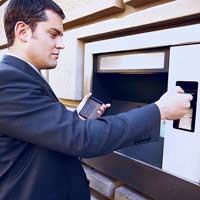 When you’re going to work abroad, you’ll undoubtedly need to exchange a significant amount of currency. Even after making the initial move, you may not cut ties with Britain completely. For example, you may still have financial obligations in the UK you need to take care of, such as a credit card payments. Or you may still have an income in sterling from investments or a property you have rented out. Whatever the scenario, there’s a very strong likelihood that you’re going to need to do large scale money transfers between sterling and the currency of your new country. You could find that this is an extremely expensive proposition, however. Banks typically charge hefty processing fees for converting one currency into another, levy commissions on the payments and often offer uncompetitive exchange rates. So how can you avoid getting mugged if you need to change money often?

Many banks offer you the option of creating a bank account denominated in a foreign currency. Some will permit you to transfer sums to and from a sterling account at no charge, though often the sterling account must also be with the same bank. This may sound like the dream solution to your foreign exchange woes but there are some disadvantages you need to be aware of too. These accounts are often high maintenance. They may charge you a substantial yearly fee just for having the account. Or they may require that you maintain a minimum balance of several thousand pounds in it. And although transfers from one account to another may be free, using a cheque or an ATM machine may not be. Moreover, the minutiae of which fees are charged for what service tend to vary significantly between one of these accounts and another, meaning you’re going to have to spend time poring over the details before you really know what you’re getting into.

Whether foreign currency accounts make sense for you or not really depends on how well the pattern of charges imposed by the bank fits with the way you tend to use your account. There’s no doubt though, that, in some cases, foreign currency accounts can be very convenient and can save you a great deal of money, but finding the right one for your needs does require some work.

If you’re transferring large sums of money, for example if you intend to purchase a house abroad and want to transfer your savings from Britain, or if you need to do transfers regularly, you should definitely consider opening an account with a foreign exchange broker. The exchange rates they offer are often much more competitive than you’ll find at the banks. Sometimes they charge no processing fee on a transaction at all, particularly when a large amount is involved, or the transfer is performed regularly. When processing fees are charged, they are typically much lower than those imposed by banks and will be charged at a low flat rate, rather than on a commission basis.

If this all sounds too good to be true, you’ll be wondering what the disadvantage is. First of all, you need to apply for an account with the broker. Second, brokers won’t usually deal in small sums. They will have a minimum amount that they’re prepared to deal with per transaction. For single transfers, this might be several thousands pounds. Many brokers are willing to reduce the minimum amount to around several hundred pounds though, if the transfers are performed on a regular basis, for example if mortgage payments are being made. If you’re concerned that fluctuating exchange rates may work against you, many brokers also allow you to prepare an exchange of currency in future at a rate fixed long in advance.

Don’t be put off by thinking that these brokers only deal with corporate clients or members of the wealthy elite. Several brokerages have developed the personal side of their business and deal every day with ordinary people just like you.

As you can see, there are ways to avoid being taken to the cleaners every time you need to do a currency exchange. Although a bit more effort is involved, if you need to change money often or in large single amounts, it will prove to be an effort worth making.